It can be used to dry a wide range of foods, including fruit, vegetables, herbs and spices, and to make jerky from any of a number of meats.

As an Amazon Associate, I earn from qualifying purchases. If you make a purchase after clicking on a link I may earn a small commission at no extra cost to you if items are purchased.

It has a built-in thermostat that allows you to dehydrate food at one of three temperature settings, or to run it in ‘Fan Only’ mode, making it a lot more versatile than single-temperature models.

The ability to switch the appliance on and off without having to unplug it from the wall socket also makes it easier and more convenient to operate.

According to the product insert for the Waring Pro DHR30 Dehydrator, all surfaces that come into contact with food are BPA-free.

Waring Corporation, the company named after its founder, Fred Waring, introduced the first electric food mixer – the ‘Waring Blendor’ – to the world in 1937. Waring Corporation now markets in two product segments: Waring Commercial which consists mainly of large-volume food processors and other heavy-duty appliances, and Waring that produces professional-quality consumer products, such as the Waring Pro DHR30 Professional Dehydrator.

The product has a one-year warranty, with the option to purchase a 5-year limited warranty applicable to the motor only.

The capacity of the Waring Pro DHR30 Professional Dehydrator is not stated in any of the literature, but a rough estimate based on the dimensions given produces a surface area of approximately 1 sq. ft. per tray. The capacity is thus approximately 5 sq. ft. when all five trays are in use.

The Waring Pro DHR30 Professional Dehydrator is shipped with five vertically stackable trays and a top-vented cover. The shape of each tray is oval with flat ends.

There are guides protruding downward from each of the flat ends to make a sturdy interlocking stack. The unit is expandable to a maximum of nine trays (the extra 4 trays are not included: they need to be purchased separately).

The unit has three thermostat settings, Low, Medium and High, for dehydration of different foods. According to the manufacturer, these settings represent temperatures of approximately 110°F, 140°F and 175°F. In addition, there is a setting that allows the fan to run without the heater being used.

The food drying trays, as well as the cover, are made of see through plastic, allowing for easy monitoring of the state of the food in the dehydrator.

The combined power rating of the fan and heater of the Waring Pro DHR30 Professional Dehydrator is 620W.

The unit runs on a 120V AC power supply with a polarized wall plug, for use in North America only.

The only color in which the Waring Pro DHR30 Professional Dehydrator is available is a steel gray base with clear oval-shaped trays.

Most customer reviews are positive about the resulting produce of the Waring Pro DHR30 Professional Dehydrator, especially the jerky that it produces.

Customers also appreciated the fact that this model has a built-in on-off switch in its controls, allowing for easier use. The three temperature settings and ‘Fan Only’ mode were also considered in a positive light.

However, a number of drawbacks to this model were also reported.

The main drawback has to do with the fan and heater unit being located underneath the dehydrator. Firstly this creates a vertical airflow, causing the food on the bottom tray to dry at a faster rate than that on the other trays. This applies to some foodstuffs more than others, and can be resolved by rotating the trays, replacing the bottom two trays with the top two during the dehydration process.

The other drawback of the placing of the fan and heater unit is that it is difficult to keep clean, and is vulnerable to damage from liquids splashing into the unit.

A significant percentage of customer reviews reported that the appliance stopped working after only a few uses. This would appear to be either a symptom of the design or else it is a serious quality control issue, whichever it is it needs to be addressed, as it appears that some dealers have even discontinued sales of this model.

A number of buyers complained that their trays or the cover had become distorted and didn’t fit properly onto the tray below, so it is advisable to avoid overheating the plastic components of the unit while cleaning them.

Another concern expressed relates to the amount of noise the unit produces, but this is a common issue with dehydrators and it is difficult to gauge the level of problem involved.

In terms of affordability and production, the Waring Pro DHR30 Professional Dehydrator is a good option, with its three step temperature control, fan only option and on – off switch.

The see-through trays make monitoring of the dehydration process easier, especially since this vertical flow dehydrator requires rotation of top and bottom trays for even drying of food.

Those who have bought it are really satisfied with the dried food they have managed to produce with the Waring Pro DHR30 Professional Dehydrator.

But Waring really needs to get its quality control up to a higher standard. The high level of reported failure rates, as indicated by the customer reviews, is really not acceptable.

Eric is the owner, author, content director and founder of dehydratorlab.com. He is the lead architect and the main man in matters concerning dehydrators, their accessories, guides, reviews and all the accompaniments.Whenever he is not figuring out simple solutions (hacks) involving cookery and their eventual storage, you will find him testing out the different types of dehydrators, to bring us the juicy details regarding these devices.He is a foodie enthusiast, pasionate about making jerky has a knack for healthy and tasty food and won't hesitate to share out any ideas that might be of value around this subject.

The Hamilton Beach 32100A food dehydrator could be a good bet if you are looking for an affordable, compact, and versatile unit. 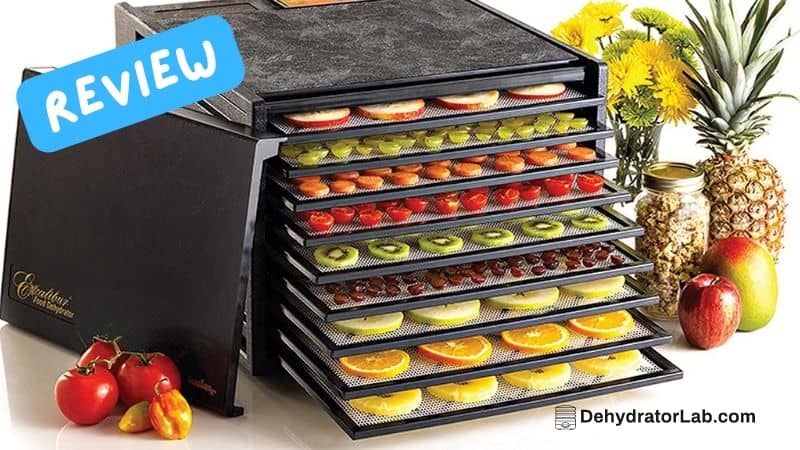 Excalibur 3900B Review – A Basic Dehydrator With Enormous Drying Surface